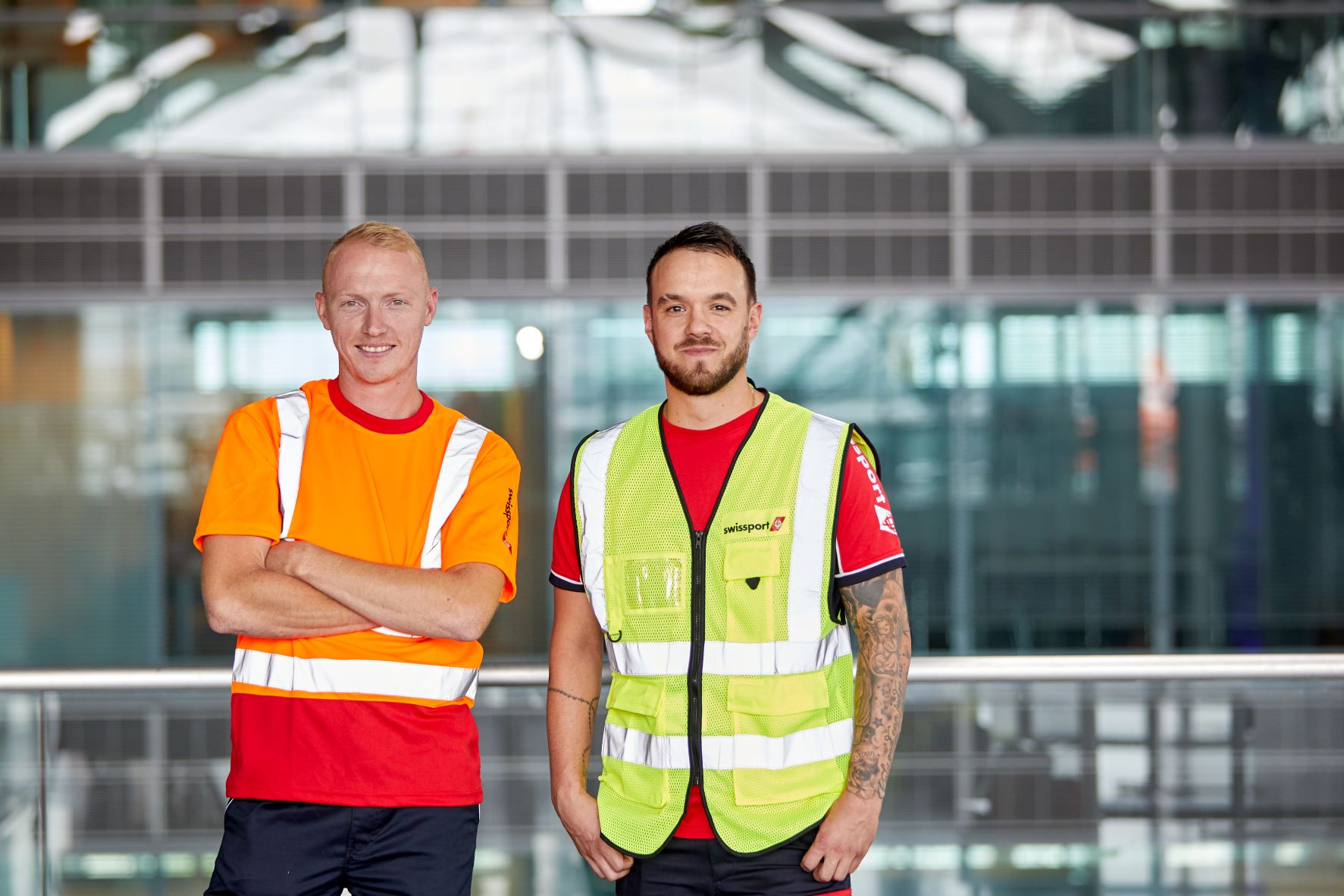 Christoph Meier has worked miracles at Swissport by harnessing the power of Ibexa DXP. He is now ready to take Swissport's online presence to the next level.

The Boye Digital Leadership conference is a yearly landmark event for technology practitioners to compare notes on best practice and discuss the innovations that lie ahead. The event, hosted in Aarhus, Denmark, attracts some of the boldest thinkers in our industry, and the sessions were lively and thought-provoking.

One of the highlights this year was a presentation by Christoph Meier, head of group communications and brand management at Swissport International AG, the global leader in aviation services.  Meier describes himself as a “futurist” rather than a “digital person”, but his understanding of the possibilities and implications of digital transformation is subtle and important.

The theme of his talk was “digital stakeholder engagement in a hybrid B2B/ B2C context”. This seems counter-intuitive because Swissport runs a traditional B2B business model, with the airlines – not the airports – as its customers. But it is more complicated than that, Meier explained. To make his point he showed the conference a video which showed the mishandling of luggage caught on video by passengers and later went viral on social media, making its way into the tabloids and tv.

It is 9.30am. Passengers are waiting to be let off the plane while baggage handlers are already taking bags out of the hold. The clip shows how one of them – in a moment of personal emotional distress – tosses pieces of luggage on a trolley, as if they were bags of rubbish.  Several suitcases fall on the tarmac. The passenger shooting the video remarks: “Oh, that one is mine,” as her suitcase lands on the ground with a thud.

“That is the killer line,” Meier said, “and it is why the clip went viral. The passengers were appalled, and rightly so. Nobody's property should be treated like this and clearly, we train our staff to the highest standards. Nevertheless, individual situations cannot always be prevented. As our bad luck would have it, the affected passenger had connections in the media, so the story was picked up by the BBC and others, and even the airport where it happened put out a statement. It was not pretty.”

For Meier this illustrates how a global B2B brand image with more than 60,000 employees and a pre-Covid turnover in excess of €3 billion can come under fire by a one-minute video on social media. His message? The world is hybrid. B2B organizations cannot ignore B2C context or how Meier puts it: "In the age of social media and the ubiquity of smartphones, pure B2B PR as we knew it has ceased to exist."

However, one of Meier’s first projects when he arrived at Swissport from Lufthansa Group in 2018 was to overhaul its digital presence.

This was challenging in several ways. First of all, Swissport operates at a lot of airports for a lot of airlines offering many different services. It takes care of all passenger services on the ground such as ticketing, baggage collection, check-in and gate service, looking after passengers with reduced mobility and also operated some 60 airport lounges worldwide. The company also provides ramp handling . Such services include baggage handling and loading/unloading the holds, fuelling, de-icing, anti-icing, towing of aircraft, etc.

Content management within the Swissport site is especially complex because not all airlines have contracted Swissport for all the services it offers across the 300 airports where it is operational.

“We have about 20% of our business in air cargo logistics,” Meier continued. “Basically taking care of the two to 300 meters between the truck door and the airplane door. So it shipments goes travel through our air cargo centers the warehouse ideally without much downtime. That’s Swissport.”

In the digital space, the complexity of Swissport's service portfolio was marketed and managed, on an outdated Typ03 solution. “It’s not that Typ03 doesn’t have good solutions, it does, but the site hadn’t been updated for many, many years and looked like a throwback from the nineties. Typ03 in fact also participated in the tender for a new Swissport platform which was won by Ibexa DXP.”

At this point, a conference delegate asked Meier to describe the scope of his digital project.

“Let me use an analogy,” Meier replied. “You have a very old rundown hotel, and the question is do you rebuild it? Do you refurbish it? What do you do with it? We basically came in, blew it up with dynamite, dug out the foundations, and put everything away. We started from scratch. We did not migrate one word. There was no migration.”

The new site launched in the summer of 2021. Visually and functionally it is a showcase for a B2B implementation. An interactive map of the world using Google technology directs visitors to a geographical region and then lets them narrow down to any airport, where they can see which services Swissport offers, with lists of the main contacts for each of those services. There is a careers portal and an advanced media centre which allows for intuitive downloads of media packs or searched content.

“Swissport is incredibly happy with the result,” Meier said, “but when we started, and to a degree still today, there is limited digital awareness. Not everybody can see the potential of the platform beyond what they know. And the effort such projects require is not always understood. A good website does not come off the shelf. It's planned and built, much like that hotel, I mentioned.”

Swissport now wants to take its web platform to the next level. The next step in the digital transformation of the company is the development of a customer portal, "naturally on Ibexa DXP, as a seamless extension of our public website," Meier explains. Swissport plans to offer customers a log in to a private section on the homepage via a second navigation in the footer.

While still within the public webpage with all its content and services, the portal according to Meier could become a one-stop shop for a wide array of additional, customer content, from service level agreements, to weekly satisfaction surveys and contacts, along with public company news.

“We have yet to define who that user (in terms of job title) is,” says Meier, “but it is likely to be airline station managers at a specific airport, possibly procurement officers, as well as regional decision-makers. We’re not there yet. What we want to do is help them find what they need in one place – a place that is helpful and intuitive and where they will want to go. It’s not a silver-bullet operational tool that we’re building but more of an engaging customer touchpoint if you will.”

Moving from B2B to a hybrid approach

It is very risky for B2B businesses to assume that the B2C dimension is not relevant for them, as Meier demonstrated with his video. “In 1985, nothing would have happened,” he said, “but today, whatever you do, good or bad, someone will see it, and then it becomes very unpredictable.”

But many businesses are still in denial about this, Meier believes.

Meier’s team looked at the inquiries that reach Swissport on social media. “Passengers use social media platforms – mainly Twitter and Facebook Messenger – to contact their airline, and they often also reach out to airline partners," he explains. Most inquiries Swissport receives are connected to delayed luggage. Regardless the cause of a delayed bag, which can range from a torn baggage tag to a piece of luggage having fall from the baggage sorting system at the departure or arrival airport, the problem typically does not surface until passengers discover that luggage is missing on the baggage carousel. That's when, according to Meier, they turn to the party they consider responsible.

"Regardless of the facts or the contractual B2B role we play, what matters is the B2C service reality. A passenger inquiry, if not properly handled, has the potential for an ugly "moment of truth" that gives companies the media spotlight they may not seek – and in fact often do not deserve. "The large majority of our people deliver an outstanding job. It takes one unfortunate situation for our reputation to take a hit – and that's precisely why we need to be responsive, quick and smart."

In the age of social media and the ubiquity of smartphone cameras, pure B2B PR as we knew it has ceased to exist.

Ignoring the existence and power of B2C makes about as much business sense as leaving your corporate site to languish on outdated CMS technology. Eventually, B2B organizations will have to embrace the hybrid model, and engage – at least reactively – with the customers of their customers – in the case of Swissport passengers, even if there is no contractual customer relationship.

“Once you do that, all kinds of commercial opportunities begin to open up,” Meier told the Boye conference.

He concluded his address by describing one such potential new income stream.

“We are cooperating in Switzerland with a small company that does home pickup and home delivery of luggage. This is such an opportunity because typically we don’t get in touch with end customers. When we check in passengers who are flying say Thai Airways, for example, we can’t advertise ourselves beyond the uniforms we wear. We can’t whisper in their ear that we’ve got this cool product or that service, can you give us your contact details? Airlines would never accept that."

“But if we approached the traveller as part of a baggage pick up service and say, you know: ‘Thank you for booking. We just wanted to tell you we offer this premium service. For €50 you get an Apple air tag for your bag, which you can keep it afterwards. Then, if you give us your contact information, we’ll make sure that you know at every point of the journey where your suitcase is and guarantee that we will get it back to you. And by the way, as you pass through the airport, you have a discount at Starbucks and at other shops.

As Meier himself observed, he is a futurist. Given the transformation of Swissport’s B2B online presence he and his team have brought to life in just a few years, we feel sure we won’t have to wait long for his hybrid B2B2C future to take shape, to the benefit of passengers and Swissport.

If you are struggling with your B2B digital transformation efforts, why not reach out to us to discuss your project. Feel free to download and read Ibexa's eBook on Digital Experience Platforms and the four considerations for creating exceptional customer experiences.