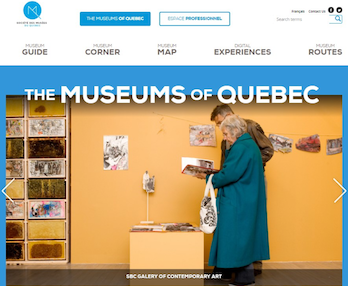 Imagine trying to rebuild a highway while vehicles are driving on it. It's a similarly challenging situation when you're redeveloping a website: you generally need to stop content edits or build a new, separate website in parallel in order to achieve significant improvements. But for some sites, such a process is too disruptive.

That was the case for The Museums of Quebec (Societe des Musees du Quebec), which promotes member museums throughout the province of Quebec. Its Professional site for museum professionals working in the sector, originally custom coded in 1999 by Espace Courbe, had had many updates over the years, including additional sites that were added to serve different audience needs. This included a bilingual site for the general public (added in 2002, custom coded), and a Museum Route site (formerly called A Museum Experience) highlighting specific cross-museum themes (added in 2011).

But after almost two decades of additions, the custom code base for the sites had become difficult to work with, and a redesign was proposed to use the more robust eZ Publish CMS platform. Espace Courbe developed a system to undertake and implement the redevelopment of the sites over the course of several years so as to minimize disruption, first migrating the Museum Routes site into eZ Publish, then adding the others so that they would all share content from a central repository.

In 2014, Espace Courbe chose to build the Museum Routes site on eZ Publish because content is such a critical component for The Museums of Quebec. Espace Courbe chose eZ Publish for its strength with structured content, multilingual sites, and protected access. "The site will be there for 15 years, so it needs to be strong and last for a long time," says Patrick Turmel, developer with Espace Courbe.

Over the course of the next three years, Espace Courbe rebuilt the remaining sites on the same eZ Publish / eZ Platform instance. Rather than having to keep multiple environments in sync during redevelopment, writing risky all-at-once migration scripts, having a big training exercise, and gettings editors to do double content entry for a period of time, Espace Courbe instead chose a strategy of steady evolution. Structural changes and new features were developed and applied iteratively, so that by the time they were ready to launch the new site designs, the new site structure had already been applied on the back-end.

In addition to modernizing the sites using a fluid development approach, Espace Courbe developed some unique features for The Museums of Quebec.

Most search engines will display results lists in a prescribed order such as alphabetically or based on specific criteria. Espace Courbe, however, wanted to ensure that all museums, even those that aren't at the top of the alphabet, got top billing in search results. So it randomized search results for every session. "You won't see the same museum at the top of the list twice," says Turmel.

Espace Courbe also built a geolocation feature that can be used on-demand on the search page. So when a visitor wants to find a museum and sorts the results by distance, the site will prompt them for permission, and then (if they grant permission), will provide a list of museums sorted by distance. It will also outline the accuracy of the geolocation reading.

For example, if the visitor is on a wifi network or has a GPS chip, the accuracy should be good. If the accuracy of the geolocation reading is low, the site will still display the list but warn the user that the sort is inaccurate. This feature is mostly useful for people using the search functionality on a mobile device; wherever they are, they can get a list of museums sorted by distance and then get an idea of those that are closest to them.

Finally, the site for museum professionals now allows members of the public to submit content such as job postings, promotions, departures, and so on. Espace Courbe built a content submission page that allows supporting documents to be uploaded. On the back-end, an approval workflow is activated when a user submits a draft of their posting, which goes to an editor who can review it before publishing.

The Museums of Quebec's sites are now more visual, easier to maintain, and more interactive for users. And with eZ Publish / eZ Platform at their core, they will last for decades to come.